Yeah? Well I did forget.

Not about all the Australian and New Zealand men and women who died or suffered in the tragedy of war….

Not about the families of the men and women who mourned these honourable souls who were victims of armed conflict….

….what I did forget was to set my alarm to wake up early enough to get my kids down to the starting point for the ANZAC Day march.

OK so ANZAC Day, being the 25th April – maybe ‘so last weeks news’  but I thought this weeks blog should be dedicated to it, purely because when I was in the UK…. I thought an ANZAC was a type of biscuit.

My first ANZAC Day came as a little surprising to me. I had lived in Australia for nearly a year, so I had learnt that ANZAC Day is very similar to our Remembrance Sunday – we honour the servicemen and women who fought in the Great war – the battle of Gallipoli being the one that first marked the tradition in Oz.

But the startling difference between ANZAC Day and Remembrance Sunday, is the fact that nearly all the shops are shut to mark the event…. just bear that in mind – and perhaps buy and extra pint of milk and loaf of bread on the 24th. 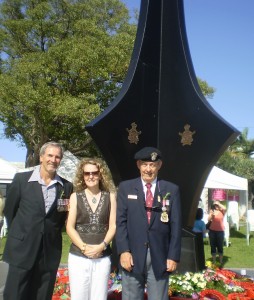 I arrived at the memorial service just in time to hear the band finish playing , so keeping as much of a low profile as possible – I pushed through the heaving crowd dragging two thirds of my children in freshly pressed uniforms to where the rest of the school had congregated after the march. I would have got away without anyone realising our lateness, if in my panic to get away I hadn’t trodden on my toddlers foot – who then shrieked in agony just as the two minutes silence was being observed.

No amount of drinks/muesli bars/dummies or mobile phone offers could console his shrill cry and it was only disguised by a chorus of Abide with me – giving me time to find a suitable distraction by way of the nearby play park.

The rest of the service went by without trauma, and soon we were all standing to attention as the bugle sounded and we watched the release of the ceremonial white doves. 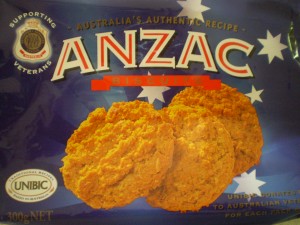 So there's more to it than a biccie?

After the service, we all gorged on complimentary ANZAC biscuits, baked by the local RSL Club and drank scorching hot tea out of polystyrene cups, while the children ran wild after having to sit still for so long.

We then headed home and soon realised that I had in fact only bought milk and bread… and we had no other food in the cupboard – so I made a stodgy yet sumptuous bread and butter pudding and we ate it for our dinner.