Today I celebrated my first Australia Day as an Aussie…. and I felt immensely proud to raise up the Australian flag (ok – it was a cheap hand-held one from the Dollar Tree… and it was actually attached to my esky – not raised up high on a pole) BUT the point is, I felt pretty darn ‘true blue’ as I knocked back the amber nectar with my nearest and dearest on the beach. 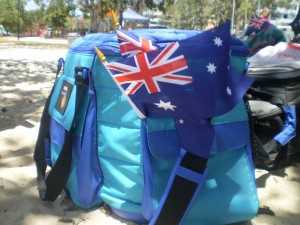 We all had a great day floating about on giant inflatable thongs, watching the fellas lollop about playing beach cricket and breathing in the smell of cooked meat and onions as Jamie Oliver-wannabes sizzled not only sausages but their shoulders in the beating sun.

'A washed up thong'

Yes, Australia is certainly a country that loves to celebrate – and many parents will have even more reason to celebrate tomorrow, as the countries schools re-open their doors to a new school year.

I have to say, I’m not one of those parents… I’ve thoroughly enjoyed the last 6 weeks with my three pals. It’s been a never-ending cycle of snorkeling, bike riding, swimming, boating (round Richard Branson’s island!), beaches, ice-skating (I know!) movie-going and generally larking about.

I suppose I should have taken the kids with me really…?

We’ve had a great summer but now the work really begins – with all three kids at different schools with different start times, and different tastes in lunchbox menus… I’m already looking forward to the next holidays.

I hope wherever you are, you get over to Australia to celebrate – and not just on Australia Day, but everyday in a life Down Under…

Have a great week. x.