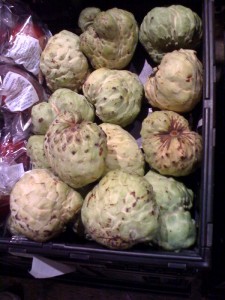 Now you might think I’m going slightly mad, ‘why on earth is she posting a blog on custard apples?’

When I first arrived in Oz, I hurridly wanted to go out and taste new Aussie foods… as I love trying new and odd stuff, even if it is only once… (Witchetty grubs…. never again….shiver)

So obviously the sound of a ‘custard apple’ was very appealing…. ‘oooh, an apple – that tastes of custard?’ Very Willy Wonker.

But, once I had cut it open and stuck my spoon into it’s flesh, I soon decided that it wasn’t the delight I was expecting – it had an odd texture, that unfortunately made me wretch, somewhat.

I forgot about the poor little custard apple episode, and carried on with life in Oz, without it in my staple diet. Until the other day, when I ran into a wonderful organic foodstore and saw they were once again in season… still tempted by the name, I decided to give them another go.

Now here’s the thing… I did exactly the same as last time, cut it open, stuck in my spoon – only to my amazement it tasted utterly devine. How was that so? Was it that the last one was not ripe? Was it off? Or was it just that my palate had now changed to accommodate these new oddments?

No, it was only when I think back, that I remember I had been pregnant…. and as I tend to suffer with morning sickness, to the point that even breathing in the ‘wrong type of air’ would make me gag, it was little wonder that I couldn’t tolerate a custard apple.

So, now they are in season (March to July) I am going to make sure I make up for the last three years…. I may even bake a pie…  how very mid-west.

One more thing  –  I know they arn’t a native Australian fruit, but they do thrive in sub-tropical climates – so although we may get the odd cylcone, we can also grow our own custard apples!

And believe me, it’s better than snacking on witchetty grubs.