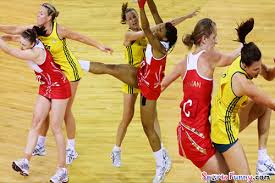 Well after almost 4 years, the time came to hang up my Zumba pants.

Let me tell you, it was not a decision that I made lightly – I loved the whole ‘stage’ thing, acting the fool while dancing, getting fit and being paid for it.. I just think the time for Zumba had hit rock bottom on the Sunshine Coast and it was time to move on.. and of my original class of 60 participants – the 8 had to agree.

So now I was faced with a dilemma, watch my thighs return to semolina – or take up a new sport…
… so netball it was.

Sigh, Monday night indoor netball – how I thought I would be good at it, is beyond me.
It was almost 28 years since I last donned my ‘GK’ bib, and they only reason they through that at me all those years ago, was because I was about 5 freakish inches taller than the rest of the 12 year olds in my class.

The rules were different now too, something about being able to use the net at the back of the court to pass to your player – and the rest of the rules? Well I realised I never knew much about them all those years ago anyway – I just remember not being able to move with the ball… probably something I should’ve looked into before getting back on the court.

Within a few minutes, my memories of being a team player all came flooding back to me… I was totally useless – and after actually not being able to catch the ball for the umpteenth time, the other players stopped passing to me.

It was exactly like being 12 again.. only now I wasn’t tall – just average, with a big sweaty radish-coloured face.

I dreaded the the following week, I hate to be the one that lets the side down – so I thought I would try extra hard, and also bought a pair of ‘intimidating’ netball gloves – the old ‘fake it till you make it’ chestnut.

Nope, I was still shite.

I didn’t go the following week – I felt sick at the thought of it…
.. but then a whole heap of the other girls in my team were going down like flies, not able to make the time/day or husbands not back from work to look after the kids etc, etc..

… so I manned up (?!) and fearlessly went back onto the court.
I was still shite, but at least I was there, making up the numbers – and the other girls appreciated me turning up – they even passed the ball to me occasionally.

So I still come home sweaty and beetroot-faced – but I’m doing it… and keeping the semolina at bay – at least till the end of the season.