Saturday night, while I had just donned my pyjamas and removed my contact lenses in favour of my thick and unattractive glasses, suddenly turned from a comfy night in front of the TV, to an action packed adrenaline rush of madness.

No sooner had I got the children in their beds, than I received several text messages from my friends… telling me to look out of my window… So once I had unpacked the dishwasher, clipped my toenails and organised the washing for the following day… I thought I would take a look.

This is what I saw… 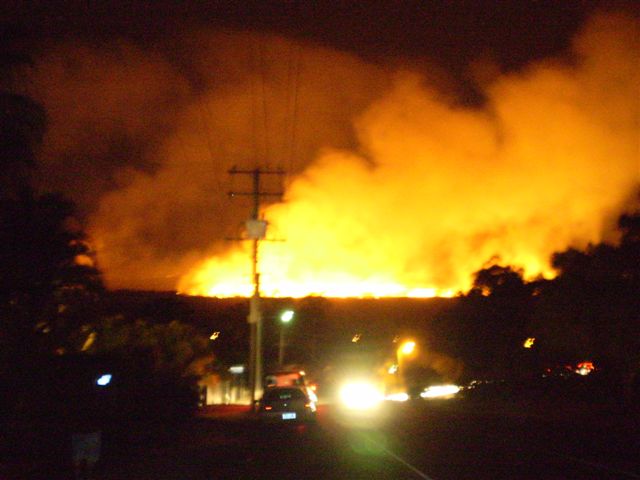 My first bushfire was upon me!!
Although my jaw had dropped to the floor, I quickly managed to scoop it up, get changed out of my pj’s and hop into my friend’s car – who had excitedly arrived at my house to further investigate the bushfire bonanza.
So, armed with a camera, a mask (for breathing purposes) and a damp towel (in case it all went wrong) we head out into the night, in search of answers and adventure. 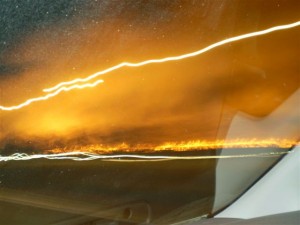 This is the scene as we raced along the highway, looking for the best spot to take footage of the blazing bush…
People had gathered all around the edge of the highway, sitting on the bonnets of their cars and taking photos.. we felt like we were witnessing a real major disaster! 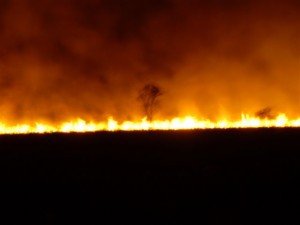 The heat was so intense, it made my eyes shrivel back behind their lids – especially as they had timidly just come out from behind the safety of their contacts lenses… it was truly an astonishing experience.
But the weirdest thing of all about the whole episode, was that it didn’t make any media news. Nothing was mentioned on the radio; the late news had no report of it and even the next day the newspapers had no wild and hairy photos of the leaping flames.
Only the next day, two days after the suburb had recovered from the smoke-filled incident, was a small two-third photo article shown in the local paper…
Apparently an arsonist had started the fire some time on Saturday morning, but as the fire became large and out of control, the local wildlife crews and fire department decided that due to ideal weather conditions, it would be a great opportunity to back burn in a controlled fire. Basically reducing fire danger at another time.
Great, but did you see the size of the flames??? Imagine casually opening your curtains to that scene! 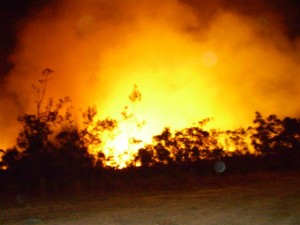 Never a dull moment, as my mum used to say.
And I wouldn’t have it any other way.. cough, splutter….
Share and Enjoy: